Along with the escalating political protests and demonstrations that we are experiencing here in Ecuador  Pachamama is also expressing herself.  Here is an article from Bloomberg on " Everything is going wrong in Ecuador "  With 7 earthquakes measuring 4.X on the coast within the last several days, and the Cotopaxi volcano warning an eruption is eminent. Ecuador was greeted this Saturday morning with two small explosions and a coating of ash on southern Quito from Cotopaxi. On Thursday two plumes of gas and ash were emitted 1.5 kilometers above the crater into the atmosphere. 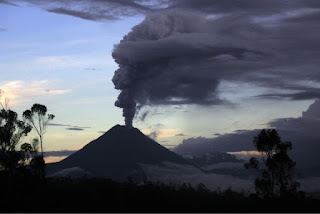 There was an emission of ash & gas last Tuesday. Last weekend there was an explosion within the volcano crater where the volcano spewed ash 3 kms in the air and spilled some lava which evacuated residents and set emergency preparations in motion. "We declare a state of emergency due to the unusual activity of Mount Cotopaxi," President Correa said during his weekly Saturday address. "God willing, everything will go well and the volcano will not erupt." The move allows the president to immediately mobilize security forces throughout the country and lets the
government block publication of information related to Cotopaxi. The quality of these plans is critical as is communication / information that reaches the public - it can be a matter of life or death.   Preparations include the potential transporting of thousands of cattle out of the path of pyroclastic flows and lahars. 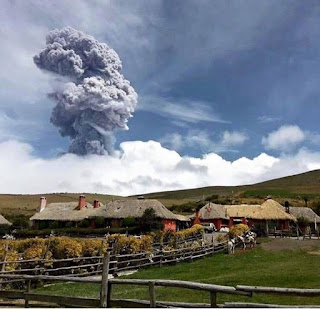 Cotopaxi is one of the most active volcanoes in the world, and considered most dangerous because of its proximity to populated areas. Eruptions of Cotopaxi pose a high level of risk to local population, cities and fields.  The flow of ice from the glacier is the main danger of a huge eruption.  A very large explosion could destroy most settlements in the valley along with the city of Latacunga, which has already being destroyed 3 times.  If the eruption is like the one in 1877, they estimate there will only be about 15 minutes from the time of the first warning until the lava and floods reach the valley. 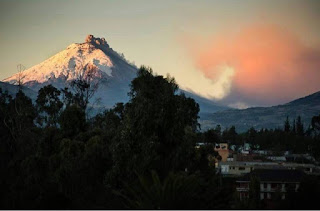 Cotopaxi, although active has shown little activity since the 1940s, reactivated this past April, and has shown increasing activity since then. Ecuador's Geophysical Institute indicates there will be an eruption it is simply not clear whether it is days, weeks or months away.  Officials indicate 325,000 citizens are at risk. 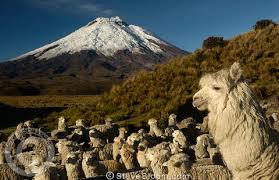 On the southern face the farming communities of San Ramon and Caspi are ghost towns, largely abandoned.  Imelda Romero is one of the few residents who decided to stay in San Ramon after the majority of her neighbours left with their livestock. "I was really scared because of the smoke which came from the volcano. I said 'oh my lord, this is the end'. There was a strong smell of sulphur that hurt my throat," she said. "I thought I would evacuate my house and run with my daughter to Rosal which is three kilometres away. My husband said he would not go. So we stayed." In the neighbouring village of Caspi, 67-year-old Maria Aynarana has returned to her home. "We evacuated in the morning but in the evening we returned because we had nothing to eat, we had no clothes," she said.   Watch a news video of the eruption. 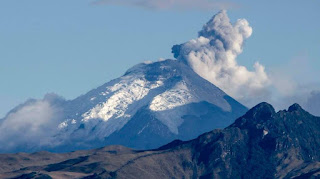 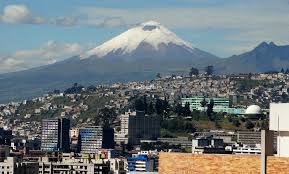 Clearly visible on the skyline from Quito on a clear day, Cotopaxi is part of the chain of volcanoes around the Pacific plate known as the Pacific Ring of Fire. Just 60 km south of our capital city of Quito, Cotopaxi is a majestic, snow covered symmetrical classic stratovolcano, 5,900 meters (19,347 ft) in height. It has a 23 km wide base rising from a plain of about 3,800 m. 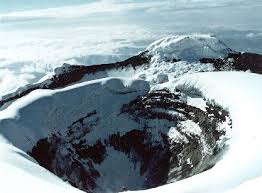 It's crater is 550 m in diameter and about 250 m deep.  Stratovolcano means it has a conical shape that has been built up by a series of eruptions.  The original volcano destroyed itself in a massive eruption 4,400 years ago. The ash that it blasted into the atmosphere cooled the planet by eight or nine degrees Fahrenheit for several years and was probably responsible for mass extinctions of plants and animals. It has grown very rapidly since then. It has erupted more than 50 times since 1738.  In the 18th & 19th century it had eight sizable eruptions. It has been relatively quiet in the last century with several minor eruptions in the early 1900's, and even smaller eruptions in the early 1940s. 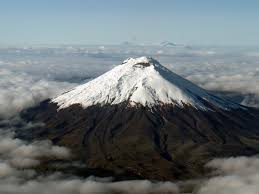 The last large devastating eruption occurred in 1877. Pyroclastic flows and lahars covered more than 200 square miles around the eruption, wiping out dozens of small towns and killing an estimated 10,000 people. Another similar eruption in 1880 but its impact was significantly less because of the destruction of towns and farms three years earlier. These eruptions produced massive lahars from the melted glacier ice creating deep river channels 100 miles from the crater reaching the Pacific to the west and the Amazon Basin to the east. It has provided the rich, black, fertile volcanic soil for agriculture. 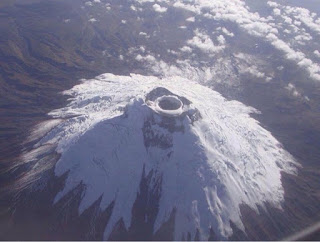 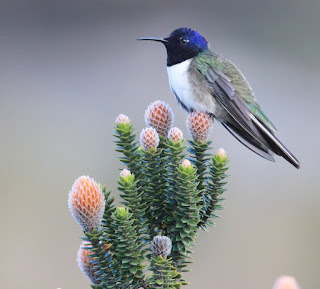 Cotopaxi is said to mean "Neck of the Moon" in an indigenous language.  The Andean people honour Cotopaxi  as a "Sacred Mountain".  Cotopaxi is worshipped as a "rain sender" which served as the guarantor of the land's fertility and the summit was revered as a place where gods lived. Between 13,000 and 15,000 ft it slopes are home to a rare high altitude hummingbird - Oreotrochilus chimborazo which nests on protected cliffs.

Climbing to the summit of Cotopaxi became a major tourist draw in the late 20th century. Up to 100 climbers attempt this technical, high altitude climb of Cotopaxi on weekends with experienced licensed guides.  With snow and ice slopes in excess of 50 degrees  the use of crampons, and ice axes is mandatory and the use of aluminum ladders is needed to cross a few crevasses. 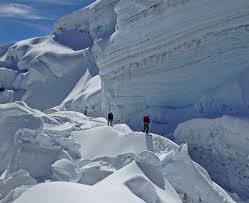 A stone mountain hut which is owned and operated by Grupo Ascensionismo del Colegio San Gabriel is at 4,800 m.  Climbers usually spend the night and start summiting Cotopaxi from here at 12:30 a:m to reach the summit before 7:30 a:m enabling a safe return before snow melts and glacier crevasses move.  Quito's Adventure tourism operators offer mountain biking tours that are from the Refuge downhill along a dirt track.

Alexander van Humboldt was the first European who tried to climb Cotopaxi in 1802.  Humboldt only reached a height of about 4,500 m. Later in 1858 Mortiz Wagner also attempted to summit but was unsuccessful. Wilhelm Reiss, a German geologist and his partner Angel Escobar from Colombia reached the summit of Cotopaxi on November 28, 1872. In 1873 Cotopaxi was summited by Moritz Alphons Stübel and then in 1880 by Edward Whymper. Rudolf Reschreiter (de) and Hans Meyer who were both painters reached the summit in 1903 and many of Reschreiter's paintings feature views of Cotopaxi.

Currently the area's hostels, restaurants, and guiding industry, and farms are left empty and awaiting.

In 1999 Tungurahua entered it's current cycle of activity, and after many warnings we have yet to experience anything significant - this has lulled Ecuadorians into a dangerous complacency about volcanic eruptions.  Cotopaxi is said to be 1,000 times more powerful than Tungurahua.
Posted by Ernie - Deborah Millard at 7:19 PM