* Ecuadorian Cacao was selected as the " best in the world " in the World Chocolate Fair in Paris, France held in October of this year.

*  Most visitors cite their main concern when visiting Ecuador is the visible poverty -  33 % of our population remains below the world poverty line.

*  Net annual migration continues to be negative one percent.

*  For a population of 15 million people here there are 14 million cell phones  !!

Beginning in early October we had the elections of the various Reinas to represent communities, schools, and organizations for the upcoming year. 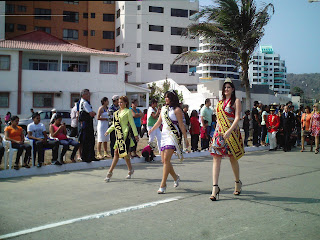 Each involves its own festivities and often a parade. Saturday, October 22nd was Leonidas Plaza's birthday, followed by the celebration of education at the end of October.  The first week of November is a national holiday week.  In fact with the summer holiday season approaching the Latinos have really started a holiday season with feriados that will blend into Christmas,  New year and "Dia de los Reyes" on January 6th... followed by Caranaval and Semana Santa. 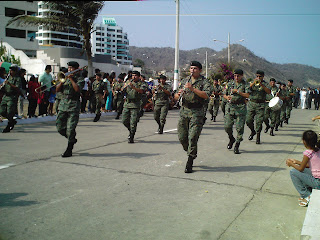 The 1st and 2nd of November. All Saints Day (Todos los Santos) and Day of the Dead (Dia de los Difuntos, o muertos) are extremely important holidays in South America.

November 1 - All Souls' Day is a day of alms giving and prayers for those who have passed on. The intent is for the living to assist those in purgatory. Many western churches annually observe All Souls' Day on November 2 and many eastern churches celebrate it prior to Lent and the day before Pentecost. It is a
time to celebrate and remember the lives of dearly departed family members.

Traditionally in Ecuador for el Dia del Muerto (Day of the Dead) – November 2nd  Ecuadorians prepare traditional foods and visit the graves in remembrance of their ancestors and lost loved ones. The cemetery is several hectares in size and varies from the famous Buenos Aires Recoleta style individually designed marble tomb sites, to a sparse hillside ( with better views ) in the far corner with simple wooden cross grave site makers. Although celebrated by all it is especially important to the indigenous Quichua people. Families gather to pray and sing to the souls of dead relatives, asking them to return for just one night. The ancient belief is that the soul visits its relatives within these days and should have plenty of food to be fed to continue further on its after life journey. The celebration itself is a mixture of ethnic cultures and Catholic customs.

The family spends significant time preparing for this visit with a variety of items such as the bread dolls, which have a specific meaning depending on their shape. Horse shaped breads for example meant transport.  The ritual involves the construction of a tomb that is adorned with the soul's favourite drink and food, and over this tomb they place black cloth and the bread dolls, together with several other things that are meaningful to the individual. People decorate altars in their homes and grave sites with food, candles, candy skulls and marigolds to welcome the souls back to earth.

Families gather together in the community cemetery with food offerings in remembrance of their ancestors and lost loved ones. Traditional ceremonial foods include Colada Morada, a delicious spiced fruit porridge that derives its deep purple colour from the Andean blackberry and purple cornstarch ( recipe ).  This is typically consumed with guagua de pan, a bread shaped like a swaddled infant.  The bread, which is wheat flour-based today was made with cornmeal in pre-Colombian times.

Our experience has been over the last several years these traditions are very quickly being lost as the volume of visitors to the cemetery is significantly lower with each passing year.

A series of week-long celebrations culminate in commemorating the 136th anniversary of Canton Sucre ( 1875 ) in Manabi. On November 3rd a series of commemorative ceremonies was held for the inauguration of a military memorial and several other parks and monuments were unveiled. 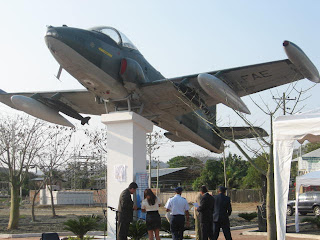 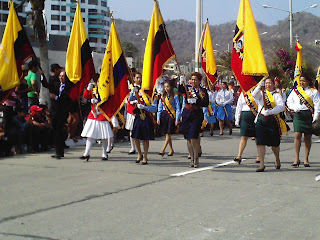 Civic ceremonies, cultural events, dances, soccer games, and a competition for swimming across the bay filled the remainder of the afternoon.   The evening festivities marked the first anniversary celebration of the opening of the bridge.

The Blue Parrot has recently opened providing B & B type accommodation for travelers and a new alternative for breakfast.

Overseas visitors will fly in to Quito or Guayaquil with Continental, Delta, American, & LAN airlines. Visiting Bahía de Caráquez, Ecuador, requires a short 30 minute flight from either Quito  ( UIO ) or Guayaquil ( GYE ) into either the coastal city of Manta (MEC), or the provincial capital Portoviejo (PVO), and then a one hour drive or bus ride to Bahia de Caraquez.  Icaro & AeroGal are the domestic airlines into Manta and TAME flies into Portoviejo. It is also possible, though much less convenient, to drive from Quito (5.5 hours) or Guayaquil ( 4.0 hours ), or to take a bus.   The San Vicente airport has been recently expanded - while it has been open for years it only receives charter plane traffic. Promoters have been announcing " the opening of this airport " now for many years !

The number of opportunistic expats undertaking property development schemes, or selling real estate  here is rising quickly.   Most have no track record or previous experience in developing, sales, or construction , have minimal personal funds invested, do not understand how difficult it is to do business here in a " lawless " environment,  are new to the culture and language,  and attempt to juggle multiple projects.  We know of professionally developed websites " selling the dream "  or a future concept where in two cases the actual land has yet to be acquired.  These promoters are not creating real value rather greedily seeking something for nothing.   While we know Ecuador is receiving a higher percentage of eccentric people &  dreamers we fail to understand what causes experienced folks to become so naive when they are so easily parted from their hard earned money for a concept that simply never materializes, or a project that is significantly different from expectations.

In summary in Latin America you buy only what you can see.
Posted by Ernie - Deborah Millard at 9:00 AM No comments: