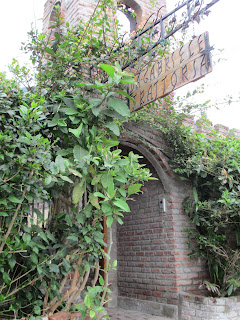 The coastal Chone River Estuary bioregion of Ecuador where we live, is no longer " new-to-us ." However  we continue to be excited like young pioneers with every new adventure, discovery, and pearl of cultural knowledge. 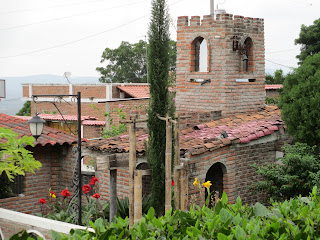 This past weekend on a daytrip to Montecristi we discovered La Trattoria da Gabriele,  a wonderful Italian restaurant perched on the hillside overlooking the mighty Pacific Ocean.

It has been designed full of character and charm, in harmony with it's ecological landscape. Constructed with wood, stones, and brick, and set in a beautiful flower garden. 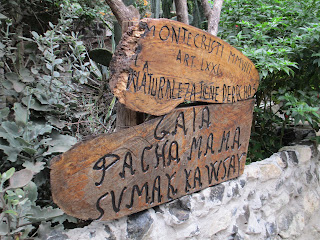 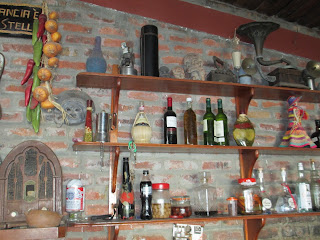 In our small coastal community of Bahia de Caraquez our choices of ethnic cuisines are very limited, so we look forward, when traveling, to enjoying flavours and culinary dishes from other cuisines.   Italian cuisine is recognized throughout the world for  simplicity, variety and excellent quality.  Trattoria Da Gabriele with her family recipes  wishes to contribute in continuing to justifying this  fame.

Gabriele Setti , restaurant proprietor relocated to Ecuador as a young man 60 years ago. 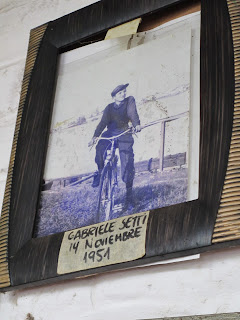 He has been providing residents of Manta fine Italian cuisine from different restaurants throughout this period.  About four years ago he built and opened in the current location on the hillside of Montecristi.

Trattoria's kitchen specializes in  authentic Italian dishes prepared based upon proprietary products such as pasta, sausages and vegetables, along with a variety of fish, seafood and cheeses. 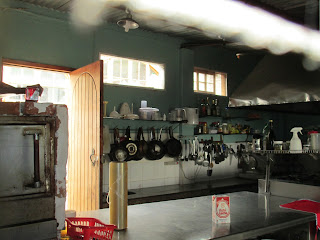 The recipes are old family recipes that have been passed down from generation to generation in the villages, cities and regions that until the end of the Renaissance were true states separated by borders and customs, each one with its own customs and folklore. These recipes have been improving since their use in great monastery kitchens  in the first millennium.   Further  enriched by Marco Polo who brought pasta from China, along with Asian spices to the Republic of Venice.  From the Americas came tropical fruits, tomatoes, cocoa, potatoes and corn.

For a peek at their menu please visit their website 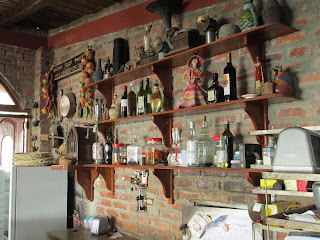 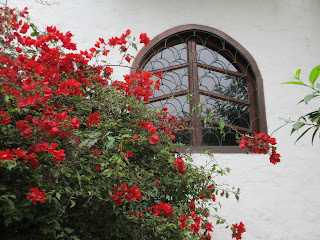 We are experiencing growing numbers of coastal visitors leaving the area significantly disappointed with their experience and findings.  It seems many have either unrealistic expectations or have little appreciation of what living in a developing latin country is all about.

National police report that crime rates in much of Ecuador are falling but  rates are rising in coastal cities.  In an effort to combat this rising tide of crime Manta city council has just passed an ordinance prohibiting more than one rider on a motorcycle  when traveling city streets.

Manta police say that a number of murders, and hundreds of robberies have been committed recently by two men on a motorcycle, where one drives and the other fires a gun or jumps off to commit a robbery.

In a similar attempt to thwart increased crime Bahia council passed  motorcycle restriction ordiances about one year ago restricting parking in front of banks or major stores, lack of mufflers, and ridership  however after the first several weeks there is no longer any enforcement.

These increasing restrictions are significantly impacting many poor, innocent citizens who rely on motorcycles as their primary  transportation.  Will the motorcycle be taken away if there is a child or wife riding with the driver ?  How are these people expected to get around ?

A frightening statistic which is  causing the government to fund a $ 2 million dollar crime investigation unit in Manta: Of  the over 680 murders in our province ( Manabi ) last year not a single one has been resolved  !!!

Posted by Ernie - Deborah Millard at 8:36 PM No comments:

To further enhance education in Ecuador, President Correa's vision for a massive South American education and research centre in the newly created city Yachay, north of Quito.  Yachay is a Quechuan word meaning  " to learn. "

The first phase provides 4,000 hectares on an ecological model promoting good living in harmony with nature.  The academic sphere will cover 650 hectares and have an estimated population of 45,000.

Eric Mac concludes a four part report with a reality check on the ambitious plan to build a Latin American Silicon Valley.

Here is an excellent article written by David Morrill and published by Live & Invest Overseas on July 1, 2013

Most Ecuador expats are well aware of the country's impressive investment in public infrastructure. New highways, airports, parks, hospitals, and schools are hard to miss, as are such high-profile public transportation projects as the new light rail system in Cuenca and the Quito subway.

According to the United Nations Economic and Social Affairs office, Ecuador has the highest rate of public spending in the Western Hemisphere currently, at 16.6% of gross domestic product. In 2012, public spending totaled US$6.3 billion, a six-fold increase since 2007, says Ecuador's Ministry of Planning and National Development.

Often overlooked among Ecuador's public investments, however, is the initiative to improve its universities. According to President Rafael Correa, who earned his master's degree in Belgium and a PhD at the University of Illinois, building a world-class university system is fundamental to improving the lives of Ecuadorians.

The centerpiece of Correa's plan is a massive education and research center north of Quito known as Yachay, or City of Knowledge. The project, which began construction three years ago, is an 18-square-mile planned community that will eventually be home to a large university and a dozen technology and innovation parks.

The goal of the project, according to its developers, is nothing less than the creation of a South American equivalent of Silicon Valley, or the North Carolina Research Triangle. "The vision is very bold," says Jose Andrade, an Ecuador native and professor at the California Institute of Technology, who is an advisor for the project.

"To be a leader in Latin American education and to be a player in world research, we have to build first-class facilities and attract first-class talent, and this is Ecuador's first step in that direction."

During the Yachay planning process, Ecuador has enlisted the help of educators not only in the United States but also in South Korea, Japan, China, and Italy. In one fact-finding trip, Correa visited the Raleigh-Durham area in North Carolina to talk to researchers, professors, and administrators. The trip was organized by David Murdock, president of Dole Foods, a major investor in Research Triangle projects and an advocate for Yachay.

Rene Ramirez, Ecuador's secretary of higher education, research, and technology, says that Yachay will be not only an incubator for new technologies and ideas, but also a driver of the Ecuadorian economy. "The public and private research conducted here will be a major component in this country's growth and development. We will encourage experimental and innovative thinking and provide the facilities and resources necessary to turn that thinking into real products and services."

Ramirez adds that there will be special emphasis on the emerging field of nanotechnology but adds that Yachay will be multi-disciplinary. "This is not simply about science and technology. It will be a center of liberal arts education, too, and be a cultural resource for the entire country."

Yachay will eventually be a collection of smaller universities, he says, each pursuing its own discipline.
Ramirez and Andrade say that construction is only half of the Yachay project. "It will be great to have the facilities but we must also recruit professors and researchers and most of these will come from outside of Ecuador," says Andrade. Ramirez adds that Correa is committed to a world-wide search for top talent and that the recruitment process has already begun.

Yachay planners say the project will cost between US$5 billion and US$6 billion dollars and take at least a decade to build. Fresh off re-election, Correa says the project will be well on its way to realization by the time he leaves office in 2017. "Yachay is the most important thing I can leave to my country. We will not lose our focus."

Despite the enthusiasm, there are plenty of Yachay skeptics. There are already Cities of Knowledge in Panama and Brazil that have fallen short of original expectations. Others say that the price tag is an unsustainable burden for a small country to bear and point out that proceeds from Ecuador's oil production, which are funding much of the country's infrastructure and educational projects, could drop off within the decade.

Correa says he understands that oil money is limited. "This is exactly why we need to improve our education system now, especially our universities. By investing in education we are putting our money into the people and creating human capital. It is an investment that will make Ecuador prosperous long after the oil is gone."
The debate, as well as the construction at Yachay, will continue. Meantime, Yachay University opens for classes the first week of October.

Posted by Ernie - Deborah Millard at 3:55 PM No comments: