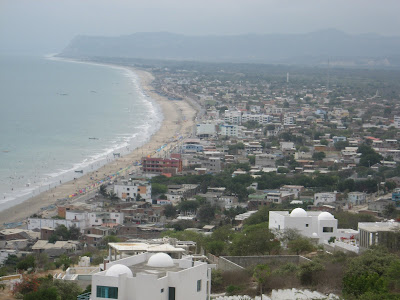 Crucita is a lovely oceanside playground and seaside fishing town about 50 minutes south of Bahia de Caraquez, and west from Portoviejo the capital of Manabi. We have now visited Crucita twice. A very popular holiday destination for people from Portoviejo and Manta, it is mostly busy on weekends and holidays. 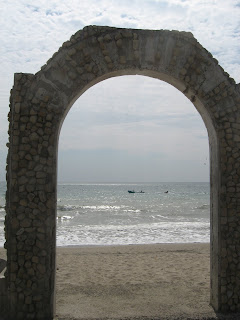 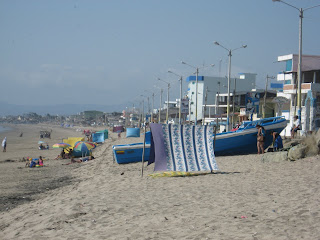 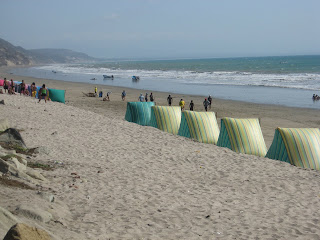 While the long, sandy, beaches were much quieter than they will be in December or January, as the schools are out in the Sierra until September (same traditional school schedule as North America) there were many people on the beach. Families set up tents for the day to take cover from the direct rays of the sun, for their children to have a nap, to change, or to shelter their picnic & belongings. 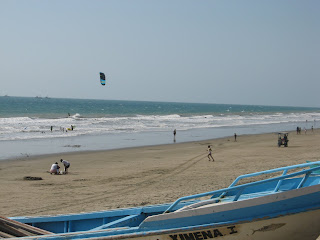 Lunch was a wonderfully fresh fish and an Ecuadorian ensalada, which had peas, potatoes, carrots and a few other vegetables with a tangy dressing – similar to a potato salad – but much lighter. Deb would love to either find the recipe, or to have someone show her how to make it.

We enjoyed lovely walks along the long expanse of sandy beach returning on the parallel malecon filled with sidewalk vendors, restaurants, artisans, and handicrafts. 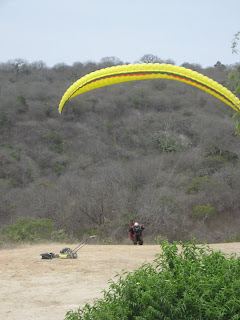 Crucita is considered one of the three best destinations in the world for hang-gliding and paragliding. Weather conditions and long stretches of sandy beaches, from which magnificent cliffs arise provide the ideal environment for these sports. 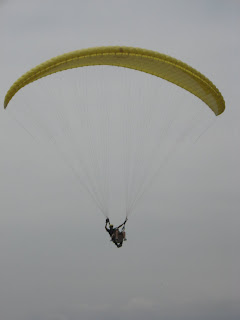 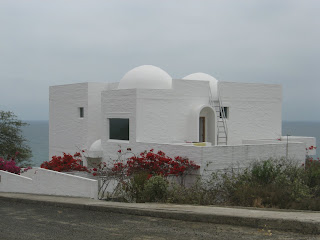 Miravista is a hillside development of white homes entangled in bougainvillea overlooking Crucita towncentre and the Pacific Ocean. It resembles the seaside resort villages of Turkey or Greece. It encompasses the launching site for the parapenting sports, and a restaurant with a magnificent view. We watched the paragliders both land, and catch the air currents to launch themselves. Spectacular launch-sites and favorable conditions allow pilots to be airborne for extraordinary long periods of time. The scenery both over the ocean and inland is spectacular and gliders are often joined by sea-birds that are enjoying the warm thermals keeping them effortlessly in the air. Watching the sunset while enjoying dinner and watching the gliders is a memorable evening.

For additional information and photos on Crucita: 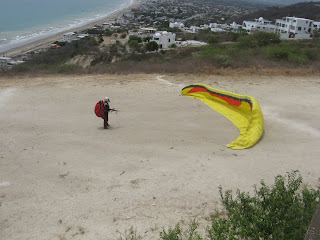 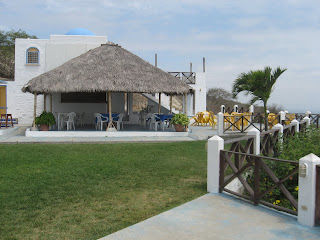 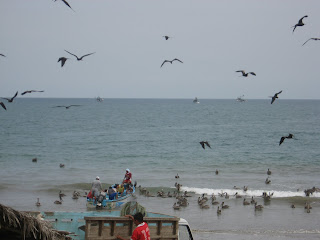 Immediately adjacent to the north is the small fishing village of Arenales. Here you can see millions of sardines being brought ashore by the fishermen each day and processed by hand by the local families before being trucked to a cannery. Along a primitive dirt trail adjacent to the beach are literally miles of thatch roof covered fish processing tables where we watched the workers cut the sardine heads and tails off. Very young girls and boys worked alongside their parents. By late morning mounds of sardines were waiting to be processed, and more waiting to be loaded onto the truck. 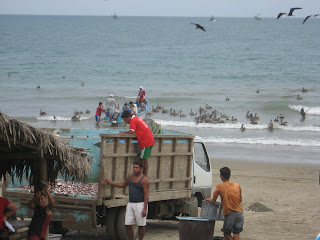 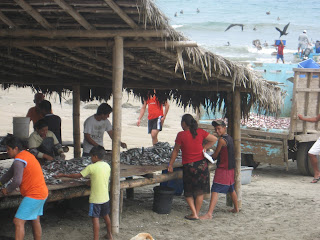 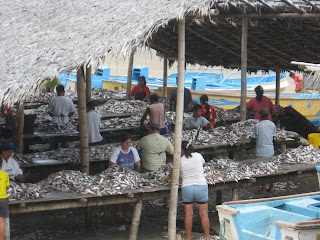 We stopped in San Jacinto to look around and enjoy a cold refreshing drink and fresh fruit. San Jacinto is 3 km south of San Clemente and known mostly for its salt production. 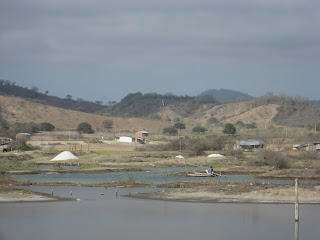 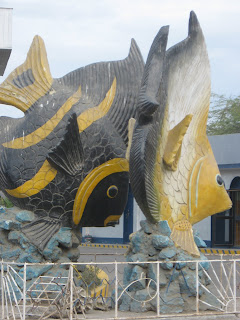 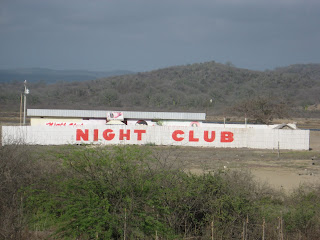 This night club is interesting from two perspectives – first it's English signage, and secondly it is very considerate. Music is often played very loud, and in this rural location, several miles from the nearest inhabited area it simply cannot disturb anyone with excessive noise levels.

The cats like to go out on the ledge at the front of our apartment and try their luck at catching a bat. Later that evening when the cat was returning backwards along the ledge she lost her footing and her feet became entangled in some wires and she fell to the ground. We are thankful that it was late and there were no customers sitting at the restaurant table where she fell. She was very happy when I went downstairs and opened the front door for her to come in. She is fine but now she only has seven lives left!! ( an earlier post described her fall into the well ) The staff at Arena Bar Pizzeria & Restaurant were very concerned about her. They had watched her fall and were surprised when she landed on her feet.
Posted by Ernie - Deborah Millard at 4:20 PM