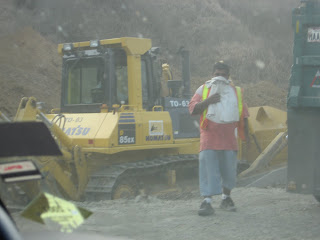 The interior roads south from Portoviejo through Manabi to the province of Guayas are in very rough condition as they are being widened and reconstructed.  What currently exists for many miles resembles little more than a wide dusty goat trail – in fact I believe a goat trail would be a smoother ride!  Once you hit the province of Guayas, capital city Guayaquil, the roads improve considerably.  The coastal route of Ruta del Sol is also currently a much better route. 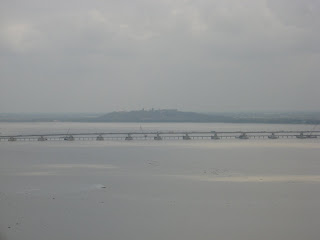 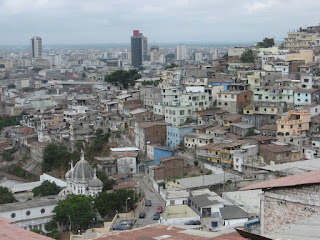 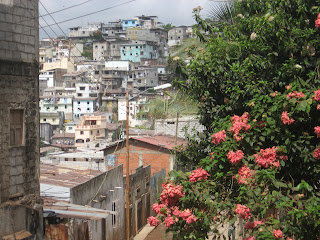 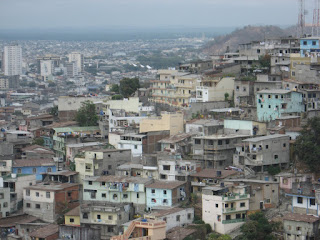 Along the west bank of the chocolate-brown Guayas River in flat coastal plains, we find Ecuador's largest city and the nation's main seaport of Guayaquil. 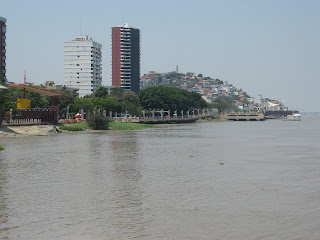 It is the largest shipping port on the Pacific Coast of South America, handling 80% of Ecuador's imports and 50% of its exports including shrimp, bananas, cocoa and coffee. The city is home to 3 million people and one of the country's two international airports. A hot and humid seaport, and industrial urban centre, it has a long-standing reputation of being dirty and unsafe. 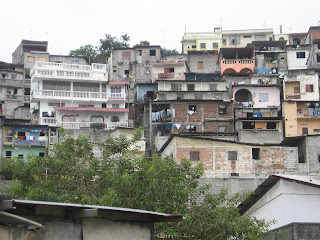 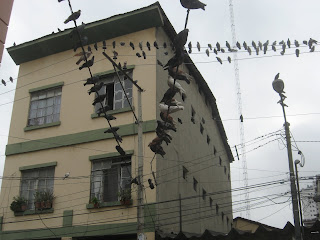 Recently it has undertaken a massive urban renewal project to attract tourists and shed the notoriously bad reputation. Though it has always had a strong economy and plenty of nightlife, due to a series of fires it does not have the cultural heritage of Quito or Cuenca. 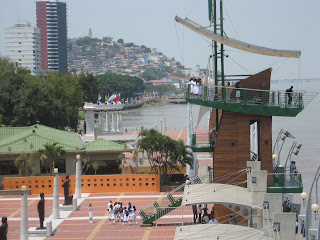 One of the main projects was Malecon 2000 a major restoration of the historic Simon Bolivar Pier, and creation of 2.5 miles of  ultramodern promenade / boardwalk along the Guayas River. In the city centre it is a pleasing mix of pedestrian friendly leisure and recreation space, green areas, monuments, modern art sculptures, viewpoints, restaurants, and tourist shopping and services.  It is anchored with a large outdoor "Hong Kong like" shopping mall  (popular for toys, clothing, electronic goods, DVDs, and CDs) on the south end, and the hill of Santa Ana and barrio of Las Penas on the north. 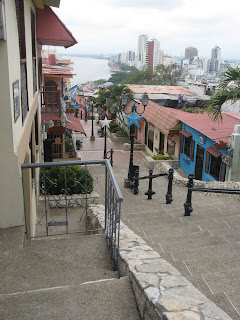 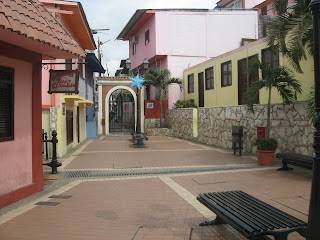 Las Peñas was completely destroyed due to a fire in 1896 (el incendio grande). It was rebuilt in a neoclassical style and now this trendy artistic centre of the city has restored many of its 400-year-old colourful houses and converted them into art galleries, shops and restaurants. 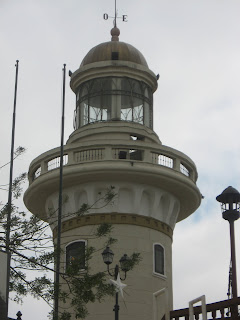 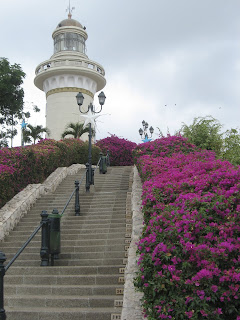 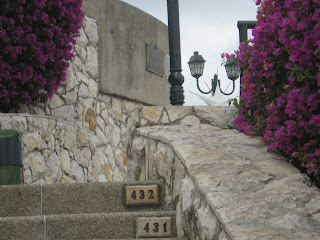 A staircase of almost 500 steps traverses the neighbourhood.  A peek into the lighthouse at the top provides wonderful vistas of the city. 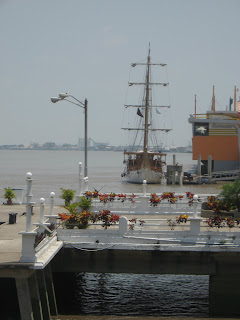 The tall ship Guayas has its home base along the river promenade. It also features an Imax theatre, and Museum of Anthropology and Contemporary Art (MAAC). 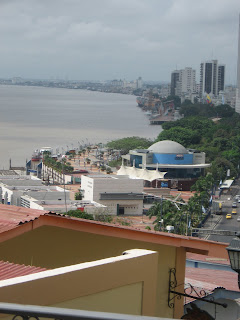 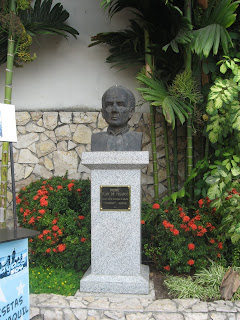 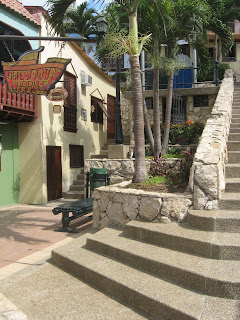 The Palacio Municipal is located in front of the Malecon 2000 and houses the political offices of city and province. Built in a neoclassical style, it is considered one of the most important architectural works in the country. 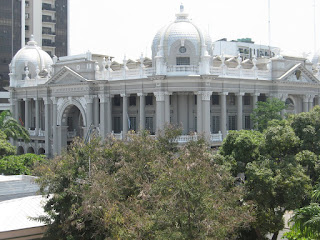 We visited the Mercado Artesanal a collection of 280 colourful artisan shops. Its many vendors sell indigenous handicrafts, leather goods, jewellery, woven goods, pottery, and paintings from artisans throughout Ecuador.  The building takes up an entire city block. 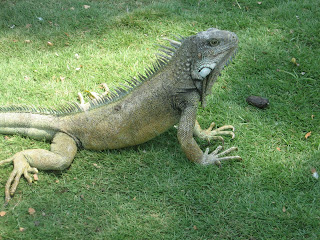 One of our favourite destinations here is the Parque Seminario dating back to 1880 (also known as Parque de Las Iguanas or Iguana Park or Bolivar Park), which is exceptional for its wildlife. It is the shady home to many large iguanas, variety of birds, and a pond filled with colourful Japanese Tilapia. These animals chose this place to feed themselves from its vegetation, because the town of Guayaquil used to end in this park and all the rest was savanna. It is relaxing to watch the iguanas and you can even feed them mango slices from the park vendors. A typical equestrian statue of Simón Bolívar is located in the centre of the park. 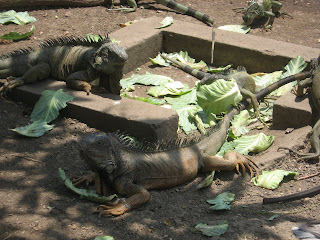 The city's first high capacity bus rapid transit system, Metrovia, opened in 2006 in an attempt to reduce traffic congestion and automobile smog.  Due to the nature of driving in Ecuador with few road signs, one way streets, traffic diversions, and the significantly higher congestion here, we recommend leaving driving to the local expert taxi drivers.  The fare during the day almost anywhere in town will cost $ 2.00; it will easily double at night due to increased safety concerns. 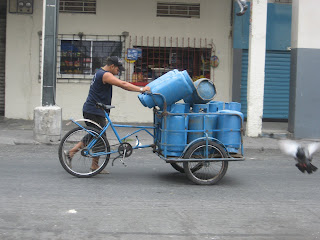 Another project was the creation of the Nuevo Parque Histórico, a park in a housing development area that is called Entre Ríos because it lies between the Daule and Babahoyo rivers (which confluence to form the Guayas river), in a mangrove wetland area. The park cost the city about 7 million dollars. 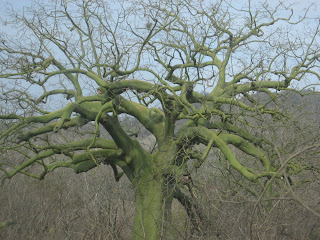 It is a refuge for fauna and a zone of historical-architecture preservation, and has a traditions-and-history exhibition centre. The idea of the creation of this park came from Ecuador's central bank in 1982, as part of their "Rescate Arquitectónico" ("Architectural Rescue") programme. 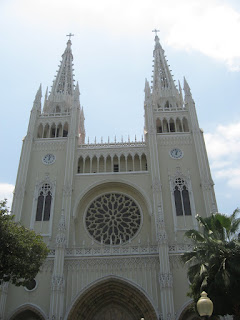