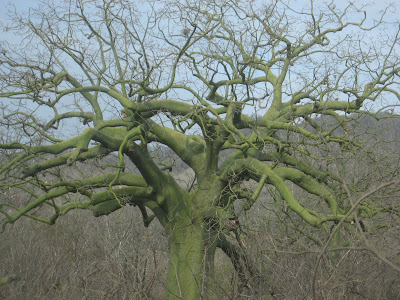 Well unfortunately the national Ecuador soccer team was not successful in either of the final two elimination games against Uruguay and Chile. In this division ten teams compete for the honour to represent South America in the FIFA 2010 World Cup in South Africa. As team Ecuador has now been eliminated, life will refocus and the Ecuatoriano's will now place their support behind Brazil, Chile, Paraguay, Argentina, and possibly Uruguay who will represent South America next year. In the North & Central American division (Canada is not represented) 6 teams compete for 3 positions in the FIFA World cup next year. The U.S., Mexico, & Honduras move forward. In Europe 23 teams vie for 10 positions and Denmark, Netherlands, Italy, Serbia, Spain, England, Germany, Slovakia, & Switzerland now move forward to represent Europe. Other divisional elimination competitions are still underway.

In Bahia de Caraquez this weekend is a national Trillo del Mono event consisting of a 50 km mountain biking course along the ocean cliffs, 15 km of ocean kayaking, and 10 km running marathon. 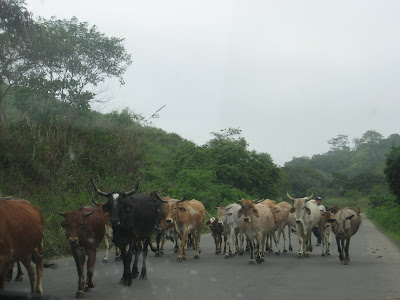 Ecuador, as in all of Latin America, has a thriving tradition of farras - parties and celebrations. Most months include at least one major festival, which involves colourful ceremonies, parades, and lavish feasts. Because Ecuador is over 90% Roman Catholic, most of the country's major holidays and celebrations follow the liturgical calendar of the Roman Catholic Church, while the remaining holidays commemorate important historical or political events and achievements. While these holidays offer one a unique opportunity and glimpse of Ecuadorian culture, if unaware they can also cause frustration with the country shutting down. Sometimes Ecuadorians do not find out when a holiday will be observed until one day before! A reference calendar of the major holidays in Ecuador is a permanent link under " Reference Tools " and also linked below ::
Reference Calendar of South American Holidays:

We look forward to the upcoming (our first) cultural festivals of All Saint's & Soul's Day on November 1 & 2 respectively. On the 2nd All Soul's Day - "Day of the Dead" families will visit cemeteries to dance, drink, eat, and leave flowers and other offerings for deceased friends and relatives in a convivial ceremony designed to celebrate the lives of those who have passed on. And on November 3rd is Bahia de Caraquez's cantonization celebration. 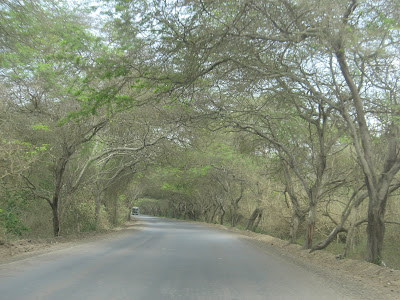 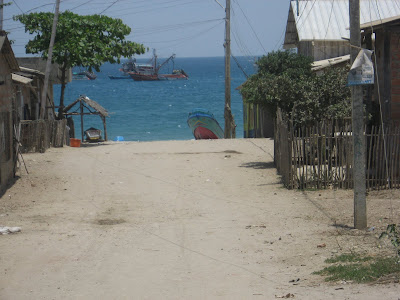 It is a valuable tourist treasure of Ecuador with its diversity of flora, fauna & beaches, incredible landscapes, national parks, and a variety of different points of interest. From traditional artisans; nature watching the migration of the Antarctic whales; to the multicultural surfing nightlife of Montanita, there is something for everyone to enjoy. 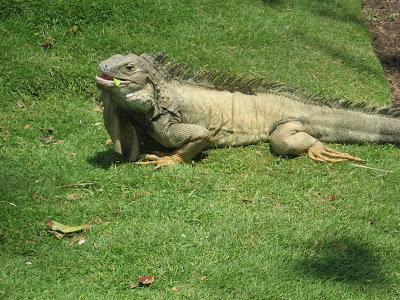 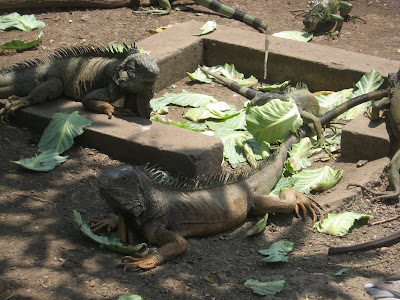 A brief visit to Guayaquil (a major inland seaport) where we enjoyed Malecon 2000, a beautiful restoration and river malecon development in the heart of the city, and the infamous Parque de los Iguanas. This is a downtown urban plaza shaded by large trees which is home to many almost tame iguanas. 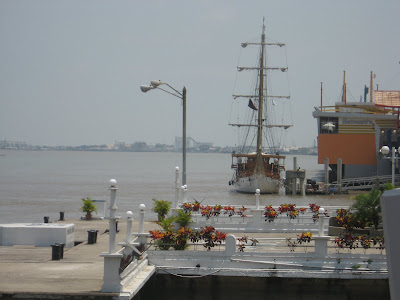 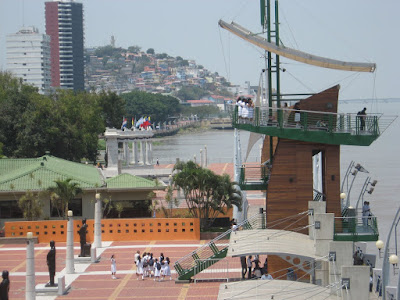 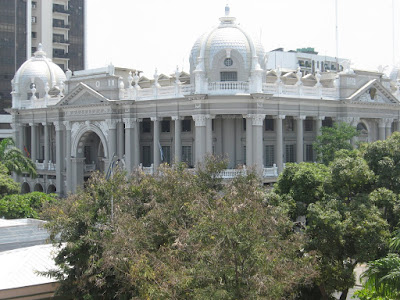 From here we headed for the coastal community of Salinas – the most southerly point, or beginning of Ruta del Sol. Salinas is one of the country's biggest resort areas and resembles a sprawling " Miami like " development that holds down the westernmost tip of the Santa Elena peninsula. This area is targeted almost completely to tourists and has very few residents. They have a very busy season in December, January, & February however the community is eerily absent of people for the remainder of the year.

As we drive north in addition to the captivating beach and ocean views you can enjoy a plate of freshly caught seafood anywhere along the entire route. At km 9 is Taos restaurant specializing in rare eastern food. Further along we will reach the small fishing towns of San Pablo, Mount Verde and Palmar. At km 39 is the calm bay of Ayangue good for a refreshing swim. Continuing we arrive at an archaeological town of Valdivia with local crafts, and an active diving centre. 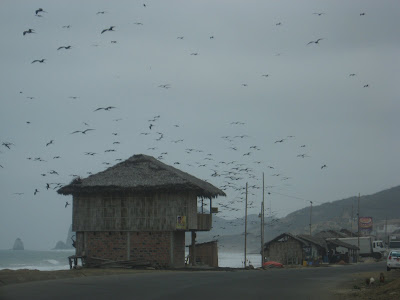 In the small community of Manglaralto we finally met (in person as we had being corresponding in cyberspace for a while) Bob & Roxanne who have retired here from the Pacific Northwest. They have a lovely home & piece of paradise right on the ocean in Manglaralto. We enjoyed a visit and then went to Casa Blanca for dinner that evening in celebration of their second year anniversary of living in Ecuador. They are undertaking the second annual Christmas event for the underprivileged children in their small community. Should you wish more information, or desire to help with a donation their website is permanently linked in " Friends" and below for your convenience: 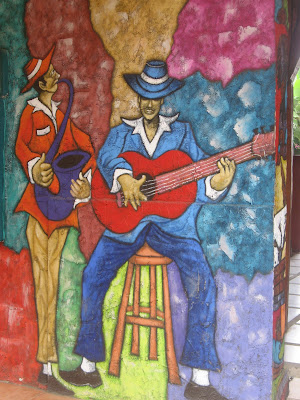 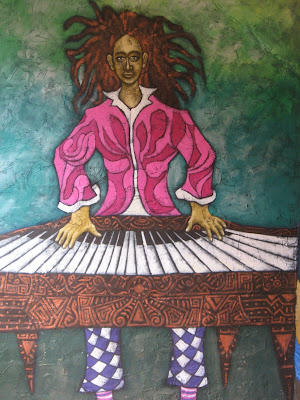 Several miles further up the coast is the small fishing village of Montanita, a dense collection of accommodation and restaurants for all budgets with unpaved streets, that owes it increasing popularity to young and old, national and foreign surfers, and a colourful beach lifestyle. Lots of gals and guys in tie-dyed clothing with dreadlocks, piercings, and body-art to match. It is Ecuador's beach for surfing and hosts many world competition events. It is a wonderfully vibrant & colourful multicultural free spirited community where you can " people watch " endlessly for hours. The hostel we stayed at was Casa Blanca which is central and has a popular restaurant. Even though it was mid-week and (we thought) should have been quiet, it seemed like only moments between the end of the partying music and the commencement of daybreak construction activity. 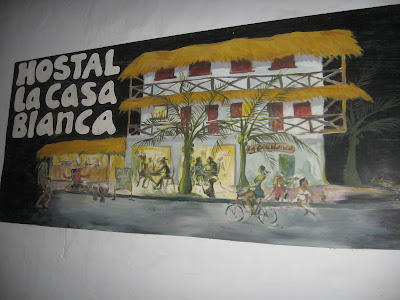 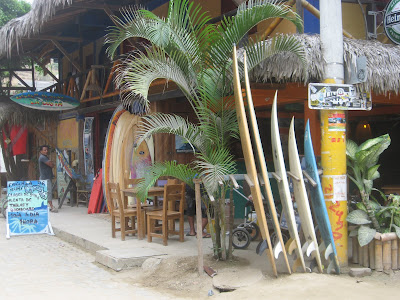 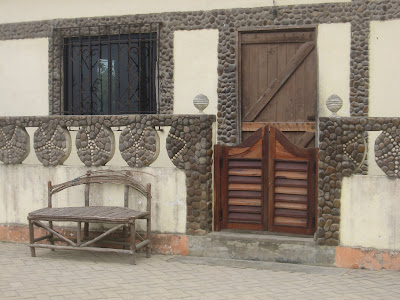 The community of Olón, barely more than a speed bump in the Ruta del Sol between Manta and Salinas, has wide, flat beaches where the water is shallow for a long ways, and has a gently rolling surf free of dangerous riptides. Olon also has many exclusive and spacious homes with swimming pools and balconies to accomodate extended families and large groups of friends for wealthy Ecudorian's. To the North is the Sanctuary of Olón, where one can see the crying Virgin. From here you begin to climb the Chongon-Colonche mountain range. At the summit it is worth pausing to enjoy the view and vistas. Ayampe the next village is a popular site for diving. Further along we cross into the province of Manabi and the villages of Puerto Rico, Alándaluz or Piqueros where you can delight in the tastes unique to the region, to enjoy beaches and camping.

Alandaluz Ecological Centre is an ecological tree house resort between Puerto Rico and Ayampe. It boasts a full recycling program, composting toilets, and organic gardens to minimize their impact on the fragile coastal environment. Near km 97 is the town of Salango and Salango Island popular for diving. 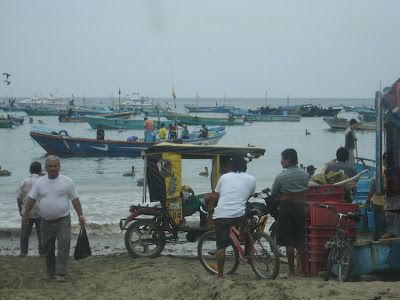 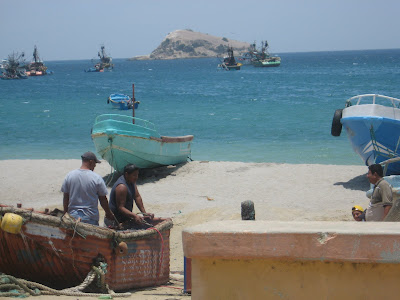 Puerto Lopez is often described as the Acapulco of Ecuador. It is a picturesque wide bay with fishing boats surrounded by green hills. It is probably one of the most popular destinations in Ecuador from which to enjoy fresh seafood, watch the whales migrating in June through September, or take a trip to Isla Plata to enjoy unique flora & fauna. 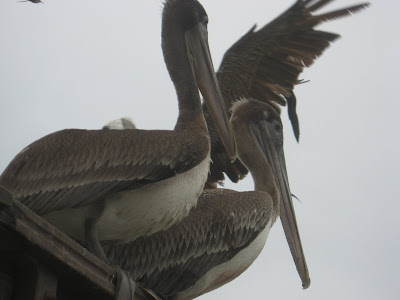 Machalilla National Park is Ecuador's only coastal park. It protects most of the county's remaining tropical desert, cacti, dry forest, and a coral formation. The park area, home of the famous beach of the Friars, along with Isla de la Plata (named Silver Island after silver bounty was left here by Sir Francis Drake) is home to many flora and fauna species found in the Galapagos. It has been called the " poor man's Galapagos" as it shelters pelicans, frigatebirds, albatrosses, boobies, sea lions, and sea turtles. 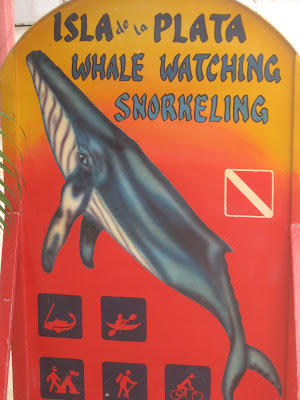 Port Key marks the end of the Ruta del Sol, and we drive back through Manta to Bahia de Caraquez. 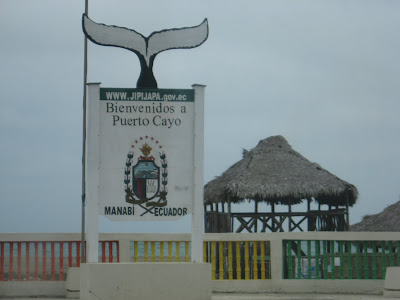