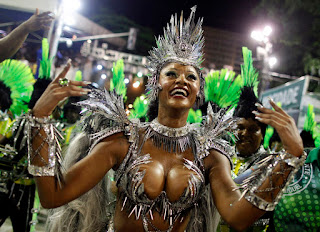 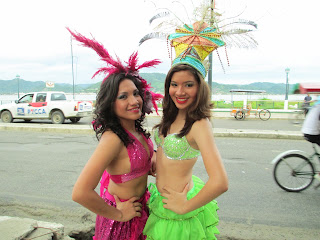 Celebrated throughout South America this is the biggest festival of each year. February our hottest month and the peak of summer -  Carnaval weekend is early this year with glorious sun filled days. A four day weekend of masquerade, excessive eating, drinking, music and dancing. Up all night, night after night. Dancing 'til dawn...then starting all over again at sunrise! For a brief history on the origins of carnival. 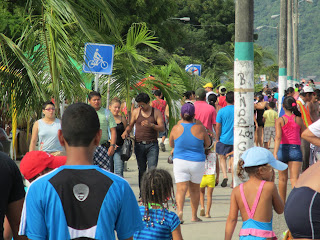 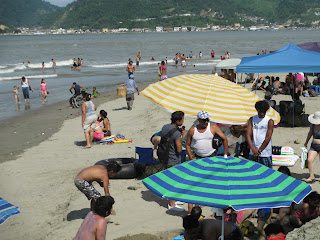 San Vicente and Canoa are markedly busier than Bahia de Caraquez.  Bahia's beaches are divided between the strong waves of the Pacific Ocean,  and the protected estuary with minimal waves. Sailing, kayaking, surfing, water skiing, and other water sports are being enjoyed this holiday weekend.  Each afternoon as the sun sets and magically paints the sky various colours providing a picturesque landscape for pleasant conversation. Within our crowds there seems to be less energy and enthusiasm, perhaps due to the overshadowing political rallies and the upcoming election next weekend.

This year on Saturday morning at 9:14 a:m Carnaval got off to a "rock and roll" start with a 6.9 earthquake centered  in Yacuanquer, Colombia.  Although about 220 miles northeast it was the strongest tremor we have experienced here in the last four years lasting several minutes.   The sounds, and vibrations emitted from the earth were reminiscent of a 7.8 quake we experienced in Puerto Vallarta.

Later that afternoon, the city centre was closed due to a swarm of bees attacking several people who received hundreds of bee stings. The swarming bees resulted in a last minute change to the parade route. The Carnaval parade preceded the election for reina.  Six lovely ladies vied for the honor of  XVIII Edition Queen of Carnaval  for the coast of Ecuador.The competition was based on their carnival costume and secondly their bathing suit. The winning score was Iris Carvalho from Loja chosen as the new Queen of the Carnival 2013. Miss Tourism is Glenda Sánchez from Manta,  and Sara Sáker from Bahia is the Estrella de Mar. 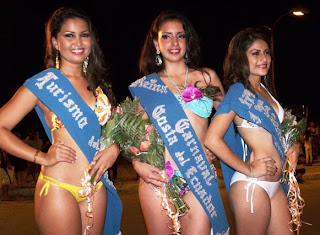 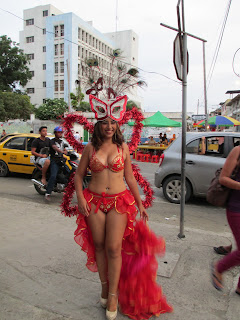 On the coast here the festival is mostly informal and community based. Sunday several musical groups are featured "Martha Loor and her band", "Santhos' of Portoviejo,  and the Bahiena youth group  "Crossroads".

A new attraction was unveiled this year at the Tennis Club. Large plastic bubbles where the children inside  played in the water pool without getting wet.  ( perhaps not so popular ) 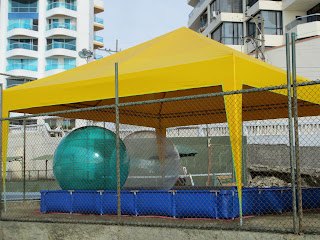 Diabillios, young and old, seek out their unsuspecting targets with water squirt guns, a shaving cream spray , or a water balloon or bucket bath. 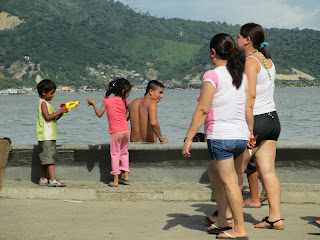 More importantly this long weekend was a gathering and social time for families. Many traveled many miles from throughout South America and Europe to be together for the four days. Large tables and shade tents could be found in many homes where conversation, card games, water games, bar-b-qued food and music filled the day. 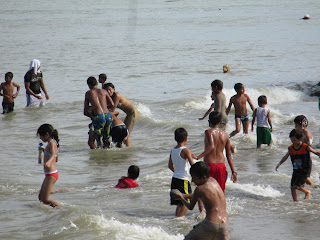 About 50 permits costing $ 10  (valid for the four days) have been issued to allow vendors to set up kiosks for the sale of food and beverages. The beer lorry's are unloading thousands of crates at the many newly established stands and stalls along several miles of beach and malecon which will serve as bars & eateries (drink sales were so brisk that the day after Carnaval we were unable to find beer left in any restaurant or even a cold soda). An army of red & white Penguino ice cream bicycle carts patrol the beaches, malecon, and local streets. The Navy and the National Police have increased uniformed personal for patrolling and crowd control. The Civil defense, Firemen and paramedics have established numerous emergency stations.

And several major event stages have been set up for artist performances, presentations, and dancing bands. Local authorities have pleaded to the people who offer the services of lodging, feeding, transport and other necessities, not to abuse prices and to provide the tourists with the best possible treatment. 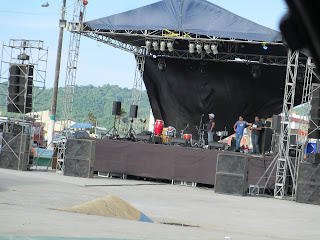 Many popular festivities are held in different regions of the country. In Ecuador the most famed carnival festivities are in Ambato - "Fiesta de las Flores y de las Frutas ." And if you would like to escape and view some awesome highlights from Rio De Janeiro's 2013 Carnaval the showcase of them all ! 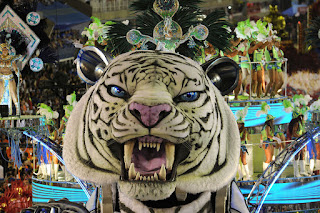 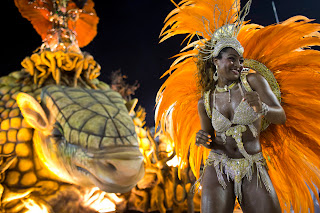 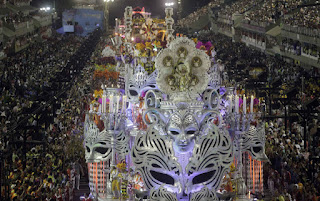 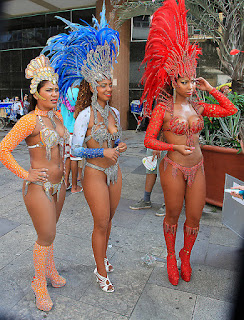 On a cultural note, for you film buffs, on Saturday in Guadalajara Mexico the Ecuadorian Film " Pescadora "  was awarded two silver prizes; Andres Crespo for best actor, and  Sebastian Cordero received best director at the 27th Guadalajara International Film Festival.   The film is based on a true story that happened in 2005 in El Matal, a small fishing village just several miles north of Bahia de Caraquez.  It sounds very similar to a scene last year, where just south of here,  drug smugglers were being chased by police and forced to dump their illicit cargo. Boxes of water-tight packages of cocaine washed ashore and were found by astonished poor fishermen. The absurd comedy unveils the adventure out of poverty to a grand stylish tour of Ecuador accompanied by a Colombian prostitute.

Next weekend  is also a long weekend for Presidential elections on February 17th. Seven opposition candidates are challenging incumbent Rafael Correa and effectively splitting the opposition vote leaving Correa with 50 per cent popular vote buoyed by his personal charisma as well as his government's heavy spending on hospitals, roads and schools. 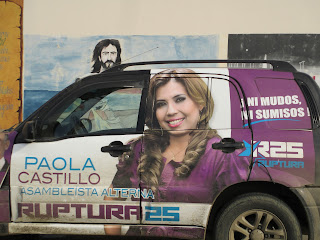 Each of the other candidates with about 6 % each.  Critics in the nation of 15 million people say Correa has failed to tackle crime and has smothered the private sector by increasing taxes and driving away foreign investors with a 2008 debt default and a forced renegotiation of oil contracts to increase state revenue from the sector.  In reality the economy is growing and Correa has provided stable leadership in a country where social protests commonly remove presidents before their term is completed.

The weekend should be a little quieter as alcohol sale and consumption is prohibited for 36 hours before, and 12 hours after the election polls open and close.

If you might be considering visiting South America for a future Carnaval, it would be prudent to book your accommodation well in advance.